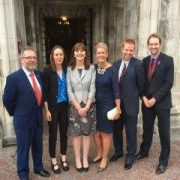 The new Aberystwyth/Royal Veterinary College training hub will help prepare “Wales’ vets of tomorrow” with the right training, skills and knowledge for their varied roles and responsibilities – the impact of which extends well beyond animal health and welfare – said the British Veterinary Association (BVA) President Sean Wensley in his speech at BVA’s annual Welsh Dinner on Tuesday (21 June).

A new hub of veterinary expertise and excellence is an exciting initiative that brings together the right resources to deliver a range of potential training opportunities to Wales’ vets of tomorrow. There are of course both risks and opportunities in increasing the number of veterinary undergraduate courses – particularly in ensuring that there are good clinical career prospects for graduates – but this hub will help safeguard animal health; promote animal welfare; and better support the farmers and other animal owners we work with across Wales.”

Mr Wensley highlighted the significant individual role that vets can, and must, play in discussing antimicrobial resistance (AMR):

“One of the greatest challenges to both animal and human health is the threat of antimicrobial resistance. AMR is a top priority for BVA and we welcomed the [O’Neill] report recommendations … To tackle AMR it is imperative that human and animal health organisations work together at strategic and individual levels. We all recognise that tackling AMR will require us to continue ‘thinking globally’ and ‘acting locally.’ As such, vets at the heart of communities across Wales are well-placed to help achieve a globally responsible Wales – and support many of the other ambitions laid out in the Well-being of Future Generations (Wales) Act.”

Throughout his speech, which drew on the policy recommendations outlined in BVA’s manifesto for Wales 2016 – 2021, Mr Wensley shared examples of vets’ “on-the-ground insight and expertise”, including the effective delivery of vital official veterinarian (OV) services, while also emphasising that vets could do even more to help progress some of Wales’ pioneering schemes:

“The Cymorth TB pilot is just one example of where vets’ valued role in knowledge transfer was able to offer support to farmers suffering a TB breakdown. Cymorth TB was rolled out across Wales in November and we strongly encourage veterinary surgeons to access the government subsidised training places.”

With Wales’ quarterly TB data showing the number of herds under restriction at its lowest level in 10 years, Mr Wensley acknowledged the ongoing work of Wales’ Chief Veterinary Officer, Professor Christianne Glossop, and her team while also calling on the Welsh Government to review its TB eradication programme:

“This is welcome news … but we do know that TB statistics can fluctuate, which is why we’re continuing to urge the government to reconsider its eradication programme to include the targeted and humane culling of badgers, by means of cage trapping and shooting only, particularly in light of the suspension of the badger vaccination programme.”
Vets’ unique opportunity and responsibility to advocate animals’ best interests at national, community and individual levels was emphasised as Mr Wensley discussed BVA’s animal welfare strategy, which launched earlier this year. He said:

“We are proud to be involved in pivotal partnership working like the Wales Animal Health and Welfare Framework Group … Alongside partnership, we need pragmatism. Where there are opportunities to improve animal welfare we must take them … There is currently very little non-stun slaughter carried out in Wales but, while it is permitted under the EU derogation, the government should reduce the welfare harm of non-stun slaughter by introducing better labelling, to ensure non-stun products are not sold unlabelled on supermarket shelves, [and] mandatory CCTV in all slaughterhouses. CCTV can only aid animal welfare at slaughter if OVs have full and unrestricted access to footage as independent monitors.”

Mr Wensley recognised the many animal health and welfare successes that Wales has led the way on – including the Control of Horses (Wales) Act, the Animal Welfare (Breeding of Dogs) (Wales) Regulations and the production of a code of practice on the use of snares for fox control – noting the key role of BVA’s Welsh Branch in achieving influence and engagement in Wales.

While Mr Wensley’s speech concluded with a “look ahead” and the BVA/RCVS Vet Futures project, which maps out where the veterinary profession would like to be on the 2030 horizon, he paid tribute to leading vets of today including BVA Past President, Dr. Peter Harlech Jones, who this year was awarded the royal appointment of High Sheriff of Gwynedd.

Privacy notice: This site uses cookies, which we use to collect anonymised statistical data to improve your experience, and not for marketing purposes. If you continue we'll assume you are happy to receive them. Read our cookie policy
Blog asks if veterinary nurses are strong enough advocates for the professi...

Statement on the outcome of the EU Referendum
Scroll to top