News |
You are here: Home1 / News2 / Only half of recent graduates say their career has matched expectation... 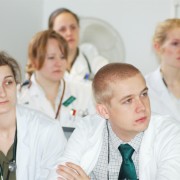 Only half of veterinary surgeons who graduated within the last eight years say their career has matched their expectations, according to a survey that the Royal College of Veterinary Surgeons (RCVS) and the British Veterinary Association (BVA) are dubbing a “wake up call” to the profession.

The results form the latest output from Vet Futures, a joint RCVS and BVA initiative that aims to help the veterinary profession prepare for and shape its future.

The online survey gathered views from 892 veterinary students (via the Association of Veterinary Students) and 1,973 veterinary surgeons who had graduated within the last eight years, during May and June this year.

Although 37% of graduates reported that their working lives had met their expectations, and a further 13% said it had exceeded them, this left 50% partly or wholly unsatisfied. Furthermore, 10% said they were considering leaving the profession entirely.

Vets who have been qualified for five years or more were least optimistic about the future, rating their opportunities for career progression less positively than more recent graduates, and were also least likely to feel that their degree had prepared them for their current work. Meanwhile, only 34% of students felt that their degree was preparing them ‘very well’ for the work they wanted to do.

Almost three-quarters (73%) of students intended to work in the UK, with most aspiring to work in small animal/exotic or mixed practice, although one in 10 was as yet undecided. Of students, 45% said they wanted to become practice owners or partners, yet this aspiration dropped to 25% among graduates. In addition, nearly double the amount of graduates said they wanted to work outside clinical practice (18%), compared to students.

When seeking a role, the three factors that both graduates and students agreed would have the greatest influence on their choice of career were intellectual satisfaction, location and a supportive environment.

This last requirement chimes with the fact that among the most popular suggestions for improvement to the veterinary degree were compulsory modules on managing stress, personal development and work-life balance, alongside more teaching of business and finance skills, and extra-mural studies (EMS) placements in a wider range of settings, such as industry.

The results are “a wake up call to the profession”, according to BVA President, John Blackwell, who adds: “The drop off in career satisfaction for vets during this crucial first eight years in practice is something we can’t afford to ignore. It points to frustration over career development opportunities and dissatisfaction with support available in practice. For the veterinary profession to remain sustainable, and an attractive career choice for the best and brightest, we need to address these issues with some urgency.”

RCVS President, Dr Bradley Viner, commented: “We clearly need to address the disconnect between expectation and reality for many recent graduates. Reviewing the educational foundation of the profession is a thread that runs through many of the proposed actions that will be outlined in the Vet Futures report due this autumn. The teaching and assessment of non-clinical skills – both as part of the undergraduate curriculum and within postgraduate education – will be important, as will be the promotion of non-clinical career pathways.”

The survey also covered issues such as students’ aspirations in terms of the type (size, ownership, sector) of practice in which they would like to work, and graduates’ future career plans. It also considers attitudes from both groups with respect to new technology.

The full research report “Voices from the future of the profession,” can be found here.

The Vet Futures report and action plan will be launched at the London Vet Show on Friday 20 November, at 1.20pm, in the Pillar Hall of Olympia London, as part of BVA Congress.

Privacy notice: This site uses cookies, which we use to collect anonymised statistical data to improve your experience, and not for marketing purposes. If you continue we'll assume you are happy to receive them. Read our cookie policy
Veterinary professor argues that the profession should prove its animal welfare...

Where are all the veterinary nurses? Is there a need for another training o...
Scroll to top