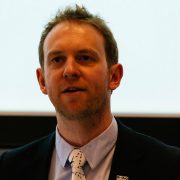 Speaking at BVA’s annual Members’ Day, Mr Wensley outlined the roles vets and vet nurses can and do play “in addressing some of society’s most pressing challenges in the [human-animal age]” and the strategic and pragmatic actions BVA has taken this past year as “the world as moved on”.

Throughout his speech Mr Wensley reviewed a year of change, progress and success for BVA. On BVA’s landmark animal welfare strategy, which launched earlier this year, he said:

Mr Wensley spoke to many of the actions outlined by the jointly led BVA and RCVS Vet Futures project, including:

“Delivering an animal welfare strategy for the profession and developing strong veterinary representation and leadership are amongst the ambitions and actions laid out in the Vet Futures report, which launched in its action plan at the Vet Futures summit in July. Vet Futures also lays our path towards thriving, innovative veterinary businesses, career satisfaction and mental wellbeing. Vet Futures is triggering inspiring and forward-looking initiatives and activities within the profession.”

Mr Wensley outlined a number of BVA positions that have been developed on other animal welfare and ethical challenges during his Presidency as well as BVA’s role in representing the veterinary profession to promote responsible pet ownership to the wider public:

“We have been in the national media to provide our ethical justifications for veterinary treatment and private veterinary costs [and] we have spoken unequivocally in the national media about the many health harms of brachycephaly. Just a fortnight ago, after a five year campaign, we welcomed the Scottish Government’s announcement that it will ban performing wild animals in travelling circuses.”

“Our strong objection [to the WATOK Regulations], in association with the Veterinary Public Health Association, prompted a House of Lords debate. We conveyed our position that all abattoirs … should have mandatory CCTV and unrestricted access to footage by Veterunary surgeons. These campaign calls will continue.”

“We have repeatedly lobbied Ministers for the protection of essential disease surveillance and celebrated successes with decisions to retain threatened surveillance units in Inverness and Omagh. Meanwhile, working with our Scottish, Welsh and Northern Irish Branches, and specialist associations, we have encouraged and welcomed the roll-out of [a number of programmes] … issued advice for members … and secured national news coverage on seasonal risk[s].”

Mr Wensley highlighted antimicrobial resistance (AMR) as “one of the most pressing global issues” and shared with BVA members the interdisciplinary work BVA is doing to help tackle AMR.

“Our new committee structure will be based on nimble, time-limited working groups. Veterinary specialists in animal welfare and ethics, as well as animal welfare scientists, will be seeded throughout these groups and represented on our policy committee. We have continued to put much effort in to developing strong working relations with our specialist and affiliated associations.”

“I was delighted that BVA could announce that we have now expanded our support and services to recent graduates, through the allocation of dedicated staff resource to the Young Vet Network, as well as funding support.

“We acted swiftly to urge the Secretary of State and devolved Environment Ministers to protect the status of [non-British EU] vet and vet nurse colleagues who, we emphasised, are making invaluable contributions in essential areas. We have since held the first meeting of our Brexit working group [and] will ensure the veterinary voice is heard … wherever we can.”

“[BVA’s] ‘function is to … collect and to condense the numerous rays of individual opinion and to focus them in such a manner that the concentrated beam shall have greater force.’ I know Gudrun will maintain this sense of focus.”

Privacy notice: This site uses cookies, which we use to collect anonymised statistical data to improve your experience, and not for marketing purposes. If you continue we'll assume you are happy to receive them. Read our cookie policy
Diverse and rewarding veterinary careers