You are here: Home1 / palliative care 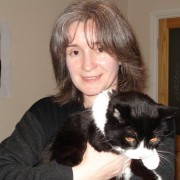 May’s topic of the month blog asks if, now that hospice and palliative care has become mainstream in human medicine, a similar development might be occurring in veterinary medicine.

Kath Dyson, a former veterinary surgeon who qualified from Glasgow in 1989, writes that veterinary palliative care, while a relatively recent phenomenon, has been growing in stature, particularly in the United States with symposia and conferences on the subject as well as webinars and chapters in text books.

Kath says that an increasing number of UK vets offer hospice care. However, she also notes differences between palliative services offered in human and veterinary medicine as well as debates within the profession over the advantages and disadvantages of palliative care versus euthanasia.

“In animal hospice it is the pet’s owner who takes on all the financial, practical and emotional costs involved, whereas human patients have a lot more support available. Euthanasia is always an option in veterinary medicine, and indeed euthanasia of an animal can legally be carried out by anyone, so long as it is done humanely,” she writes.

On the euthanasia debate she adds: “Some regard euthanasia as more of a last resort, with hospice assisted natural death being seen as more preferable and only a minority of patients requiring euthanasia. Others feel that euthanasia is more often likely to be the preferable outcome of a period of hospice care in the animal patient, even though they do not rule out a natural death.”

Overall she argues that additional expertise from veterinary surgeons in end of life care will help the profession be “even better able to provide truly lifelong care to all their animal patients”.

To accompany Kath Dyson’s article our poll this month asks if hospice care will become a standard part of practice.

Last month’s poll asked if vets are given adequate information, guidance and support on ethnic and cultural diversity in relation to a blog written by a British Asian vet about prejudice he encountered from a client.

The vast majority (90%) of the 118 people who responded to the poll thought that the profession was lacking in support when it came to diversity. Diversity in the profession and how to increase it has been a key topic identified by the project and it will be one of the issues addressed in our final report published later this year.